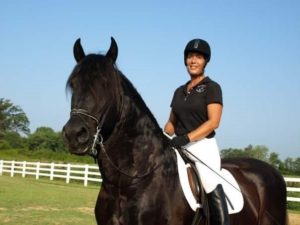 At HART: Janice joined our Instructor team at HART in November of 2015. Her ability to use humor, layman’s terms, and analogies to provide instruction, while staying true to classical principles has made her a valuable complement to our teaching team. Her students range in age from 7 to 70 and from beginner to advanced. HART is pleased to have Janice as part of our team.

Off the Clock: As vice president of American Legion Auxiliary, Post 359, Janice devotes much of her free time to helping veterans and causes such as Vet Relief and Canines for Warriors. She is very active with the Legion Riders and she volunteers for events and participates in motorcycle rides, toy delivery at Christmas, Honor Flight, the Vietnam Wall memorial, and more.

Background: Janice first sat astride a horse while in diapers. When she was old enough, she spent her summers at Camp Marlyn in Andover, NH. There, her passion for horses and horsemanship blossomed, and it caught the eye of Kim Meier, who ran Andover Horse Center as part of the camp. As her skill and commitment grew, she was selected for clinics with Denny Emerson. The rest, as they say, is history. Dreams do come true. She spent her summers competing on the New England Eventing circuit.

While back at home on Long Island, since she did not have a horse of her own, she found a way to be in the saddle any chance she could, even resorting to being a breeze rider for several race track training stables. She schooled and competed horses for “anyone that had one” on the NY, Tri-State circuit, and in the process discovered she had an aptitude for explaining what she felt on the back of a horse to others.

In 1997, Janice moved to Las Vegas, NV, where she honed her Dressage and teaching skills as a working student under the tutelage of Prix. St. George Dressage Rider and clinician, Gail Alterwitz. With a love for Eventing, which required greener pastures, Janice relocated to East Texas in August of 2003. She bought a farm, small by Texas standards, but big enough for a large dressage arena, stadium jump course, and a few cross-country fences.

She took a chance with the philosophy, “If you build it, they will come.” It paid off. Quickly, she developed a diverse clientele. She was able to open the minds of many on the preconceived notions of Dressage and English riding in general. She worked with folks from just about every discipline, reiners, cutters, Fox hunters, backyard “do it your selfers”, etc.

Before long, Janice was conducting clinics with Panola and Galveston Mounted patrol units and training young horses for Pleasant Hill Friesians, New Horizons Ranch, and Foxcrest Farms. She polished her skills through clinics with Bill Woods and cooperative efforts with colleagues, such as Debbie LaValle.